Residence vs Terroterial and Citizenship based taxation. 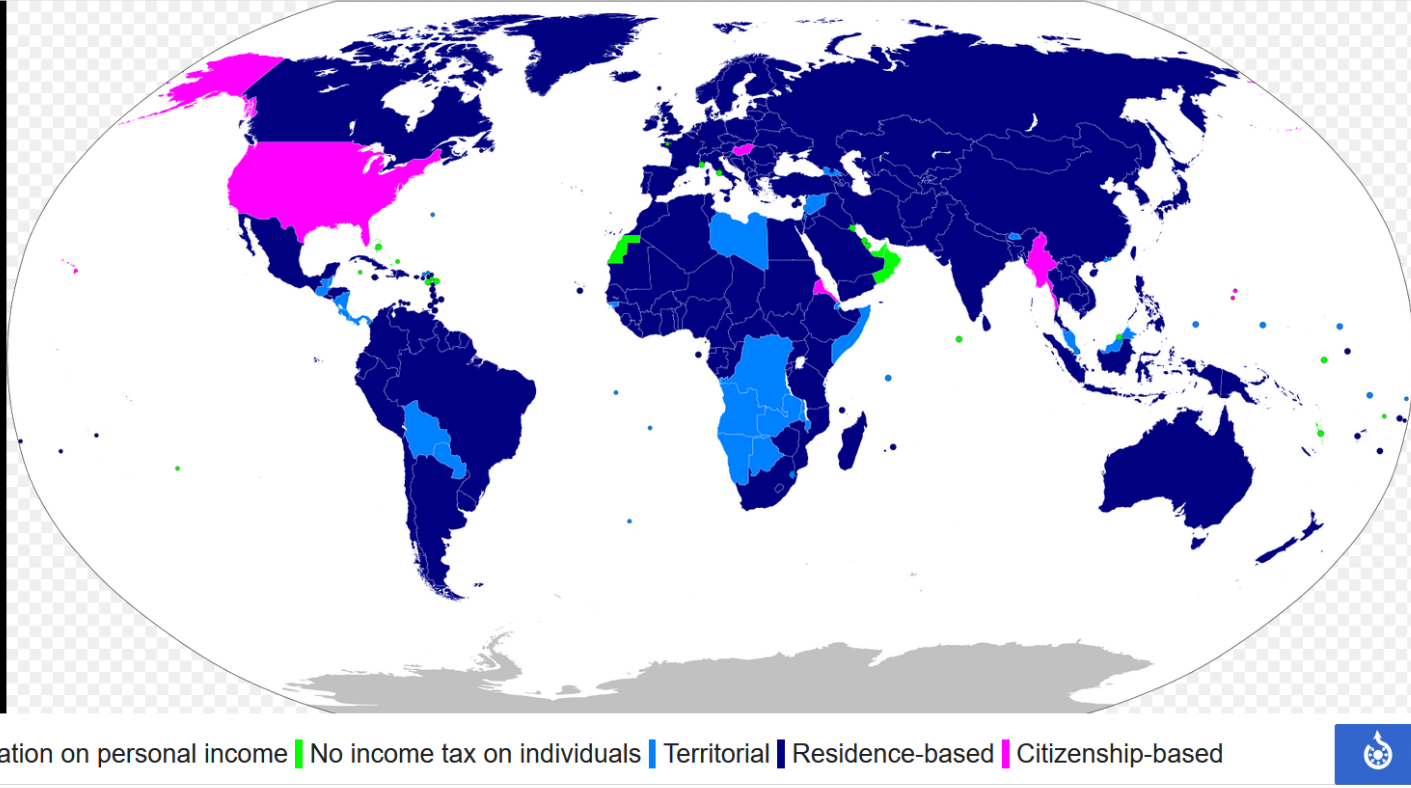 No income tax on individuals

Residence-based taxation (tax on local income of individuals, and on foreign income of residents)

Countries that tax income generally use one of two systems:

In the territorial system, only local income – income from a source inside the country – is taxed. In the residence-based system, residents of the country are taxed on their worldwide (local and foreign) income, while nonresidents are taxed only on their local income. In addition, a small number of countries also tax the worldwide income of their nonresident citizens in some cases.

Territorial systems usually tax local income regardless of the residence of the taxpayer. The key problem argued for this type of system is the ability to avoid taxation on portable income by moving it outside of the country. This has led governments to enact hybrid systems to recover lost revenue.

Countries with a residence-based system of taxation usually allow deductions or credits for the tax that residents already pay to other countries on their foreign income. Many countries also sign tax treaties with each other to eliminate or reduce double taxation which includes income taxes, inheritance taxes, value added taxes, or other taxes

Most jurisdictions tax income on a residency basis. They need to define "resident" which is typically a 183 day rule, which then characterize the income of nonresidents. Such definitions vary by country and type of taxpayer, but usually involve the location of the person's main home and number of days the person is physically present in the country (183 days).
Citizenship-based tax system
In the vast majority of countries, citizenship is completely irrelevant for taxation. Very few countries tax the foreign income of nonresident citizens in general:

The United States taxes the worldwide income of its nonresident citizens using the same tax rates as for residents. To mitigate double taxation, nonresident citizens may exclude some of their foreign income from work from U.S. taxation, and take credit for income tax paid to other countries, but they must file a U.S. tax return to claim the exclusion or credit even if they result in no tax liability.

Hungary considers all of its nonresident citizens as tax residents, except those who hold another nationality
France taxes its citizens who move to Monaco as residents of France
Italy continues taxing its citizens who move from Italy to a tax haven
We are making a list of Countries which is ideal for Tax Residency based on your citizenship. Stay tuned :)
CHECK OUT THE ABOVE ARTICLE IMAGE TO SEE WHO USES WHAT SYSTEM OF TAXATION SO YOU CAN PLAN YOUR TAX PROJECT